December 09, 2009
This article, "The Devotee's Labyrinth," was in the Fall 2009 issue of Venice Historical Society's Journal. The author is Delores Hanney. First the graphics, then the text of the same piece. I've been asked if the cover art is mine. No, it's a Venice CA postcard from over a hundred years ago. 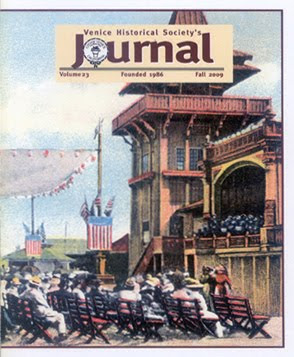 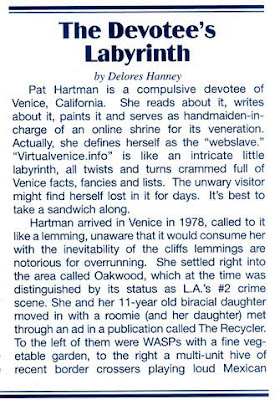 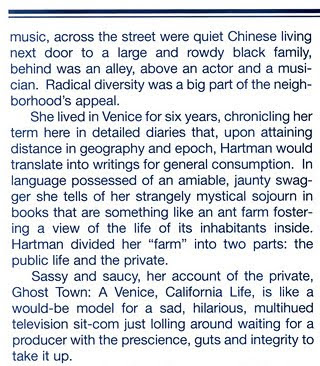 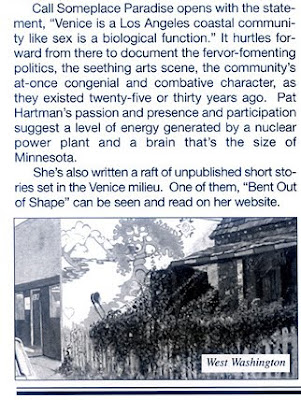 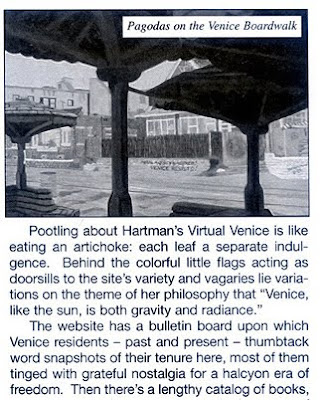 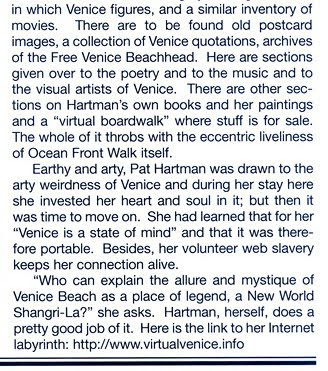 Pat Hartman is a compulsive devotee of Venice, California. She reads about it, writes about it, paints it and serves as handmaiden-in-charge of an online shrine for its veneration. Actually, she defines herself as the “webslave.” Virtualvenice.info is like an intricate little labyrinth, all twists and turns crammed full of Venice facts, fancies and lists. The unwary visitor might find herself lost in it for days. It’s best to take a sandwich along.

Hartman arrived in Venice in 1978, called to it like a lemming, unaware that it would consume her with the inevitability of the cliffs lemmings are notorious for overrunning. She settled right into the area called Oakwood, which at the time was distinguished by its status as L.A.’s #2 crime scene. She and her 11-year old biracial daughter moved in with a roomie (and her daughter) met through an ad in a publication called The Recycler. To the left of them were WASPs with a fine vegetable garden, to the right a multi-unit hive of recent border crossers playing loud Mexican music, across the street were Chinese living next door to a large and rowdy black family, behind was an alley, above an actor and a musician. Radical diversity was a big part of the neighborhood’s appeal.

She lived in Venice for six years, chronicling her term here in detailed diaries that upon attaining distance in geography and epoch, Hartman would translate into writings for general consumption. In language possessed of an amiable, jaunty swagger she tells of her strangely mystical sojourn in books that are something like an ant farm fostering a view of the life of its inhabitants inside. Hartman divided her “farm” into two parts: the public life and the private.

Sassy and saucy, her account of the private, Ghost Town: A Venice, California Life, is like a would-be model for a sad, hilarious, multihued television sit-com just lolling around waiting for a producer with the prescience, guts and integrity to take it up.

Call Someplace Paradise opens with the statement, “Venice is a Los Angeles coastal community like sex is a biological function.” It hurtles forward from there to document the fervor-fomenting politics, the seething arts scene, the community’s at-once congenial and combative character as they existed twenty-five or thirty years ago. Pat Hartman’s passion and presence and participation suggest a level of energy generated by nuclear power plant and a brain that’s the size of Minnesota.

She’s also written a raft of unpublished short stories set in the Venice milieu. One of them, “Bent Out of Shape” can be seen and read on her website.

Pootling about Hartman’s Virtual Venice is like eating an artichoke: each leaf a separate indulgence. Behind the colorful little flags acting as doorsills to the site’s variety and vagaries lie variations on the theme of her philosophy that “Venice, like the sun, is both gravity and radiance.”

The website has a bulletin board upon which Venice residents – past and present – thumbtack word snapshots of their tenure here, most of them tinged with grateful nostalgia for a halcyon era of freedom. Then there’s a lengthy catalog of books, in which Venice figures, and a similar inventory of movies. There are to be found old postcard images, a collection of Venice quotations, archives of the Free Venice Beachhead. Here are sections given over to the poetry and to the music and to the visual artists of Venice. There are other sections on Hartman’s own books and her paintings and a “virtual boardwalk” where stuff is for sale. The whole of it throbs with the eccentric liveliness of Ocean Front Walk.

Earthy and arty herself, Pat Hartman was drawn to the arty weirdness of Venice and during her stay here she invested her heart and soul in it; but then it was time to move on. She had learned that “Venice is a state of mind” and that it is therefore portable. Besides, her volunteer web slavery keeps her connection alive.

“Who can explain the allure and mystique of Venice Beach as a place of legend, a New World Shangri-La?” she asks. Hartman, herself, does a pretty good job of it. Here is the link to her Internet labyrinth: http://www.virtualvenice.info
artist fun Brags writer fun